American rock legends The Eagles are performing live at the Viejas Arena for 1 night only! The Eagles – Glenn Frey, Don Henley, Joe Walsh and Timothy B. Schmit – will perform classics spanning their career including “Hotel California,” “New Kid In Town,” “Take It To The Limit,” “One Of These Nights,” “Lyin’ Eyes,” “Rocky Mountain Way,” “Best Of My Love” and “Take It Easy.” Hits from band members’ solo catalogs will also be featured during the evening. Tickets are available now! 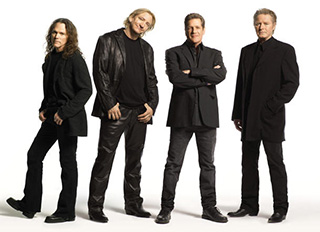 "The Eagles are an American rock band formed in Los Angeles in 1971 by Glenn Frey, Don Henley, Bernie Leadon, and Randy Meisner. With five number-one singles, six Grammy Awards, five American Music Awards, and six number one albums, the Eagles were one of the most successful musical acts of the 1970s. At the end of the 20th century, two of their albums, Their Greatest Hits (1971–1975) and Hotel California, were ranked among the 20 best-selling albums in the U.S. according to the Recording Industry Association of America. Hotel California is ranked 37th in Rolling Stone's list of "The 500 Greatest Albums of All Time"